The ViewSonic gTablet helps to bridge the gap between the lower specification budget offerings, and the more powerful tablets such as the iPad 2 and Galaxy Tab. If $500+ seems like far too much money to spend on your new tablet computer, then this could just be the tablet for you. But how does it hold up when you take a closer looks at its features? 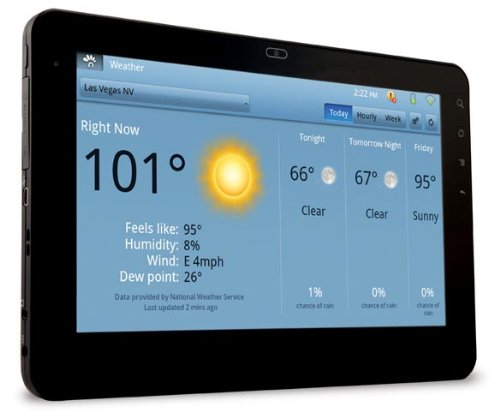 Key Specs For The ViewSonic gTablet

What’s Great About The ViewSonic gTablet…

Battery Life: With 8-10 hours average battery life, the gTablet really is up there with the best (including the iPad, Xoom and Samsung Galaxy Tab). What’s really impressive about this is the fact that the ViewSonic tablet costs nowhere near as much as its competitors in this area. This is a huge benefit for a far more budget tablet offering.

Expandable Storage: Although the ViewSonic gTablet only comes with one basic storage option (a mid-range 16GB), you can expand it up to another 32GB with the included micro-SD card slot. This is an excellent boost. Again, the storage size is fantastic value given the budget price of this tablet.

Price: If you hadn’t guessed it already from the points above, the price is another reason to consider buying this tablet computer. It’s under $300, which is far less than the higher-end tablets out there and only a little more than the budget offerings. The great thing is that it’s far more powerful than the most budget tablets, and not far off the expensive devices with its powerful NVidia processor (also used by the likes of Xoom, Galaxy Tab, the Eee Pad and others).

Ports: There are plenty of ports on this high-value tablet. This includes a USB port (for external storage or keyboards), mini USB port and an HDMI port for connecting to a big HDTV screen. This is more than tablets such as the iPad 2 have to offer!

Screen: Unlike some of the most budget tablets out there, this one does include multitouch. This is the far more advanced type of touchscreen technology included on the high-end tablets. It means you can make use of controls that involve touching the screen in two places (important for certain apps and games). The viewing angle on the screen doesn’t quite match up to more expensive competitors, however. This effectively means you’ll find it harder to see what’s on the screen when you’re not viewing it straight on.

What’s Not So Great About The gTablet…

Operating System: Although there are many benefits associated with running on the Android operating system, this is not the newest version of Android. The version running on the gTablet (2.2) was not originally designed for tablets, and not all Android apps will work on it. Thankfully it still has the ability to run Flash if that’s a feature you’re looking for (for Flash games and videos on websites).

Camera: The built in webcam is not great quality at 1.3 megapixels, but will do the job you need it to do (for making video calls across an internet connection).

No 3G Access: Although you wouldn’t really expect it on a tablet at this price, the gTablet doesn’t have the option of connecting to 3G mobile broadband. This means you’re limited to connecting only when there’s an available Wi-Fi hotspot.

Apps: Although the tablet runs on Android, it doesn’t actually feature the Android Market app store out of the box. It has an alternative app store that’s more limited, though you’ll still be able to find most of the common types of apps you’d be interested in (check that the specific apps you want are available before buying).

Interface: The device uses “Tap N’ Tap” which has replaced the standard Android interface. This doesn’t offer the same level of experience, so you may want to switch back to the Android 2.2 interface (thankfully a ViewSonic update made this option available).

Weight: Weighing in at 2.5 pounds, this is certainly not the lightest tablet available. This will be noticeable when using the tablet for longer periods of time, as you may find it less comfortable to hold up. Thankfully there are keyboard docks available to help address this issue, and the tablet is still highly portable and small in size.

My Final Thoughts On the Viewsonic gTablet

This is an excellent value tablet buy if you aren’t too bothered about not having the latest version of Android. As long as you still find the older version easy enough to use (which you probably will if you’ve ever used it before on a smartphone) and aren’t too bothered if some of the latest apps aren’t compatible, then the ViewSonic gTablet will probably do everything you need. The fact that it has the ability to install custom firmware to override the installed “Tap N’ Tap” is also a massive benefit.

It’s got a good processor, a webcam for video calls, a good-sized screen, and it doesn’t look bad either! This is definitely a contender to the biggest Android tablets based on the fact that it costs a lot, lot less!