The Samsung NF310 10.1 inch netbook is a slimline and lightweight netbook that from the outside seems much like other netbooks. But once in use it is clear that this is a far more powerful and fast machine than the average netbook.

A large majority of netbooks go for battery life over computing power, but thankfully the NF310 chooses to provide a more usable level of power. Though it is still a power efficient Intel Atom processor, this model is dual core. It increases the speed and power, allowing two separate processes to run at the same time. 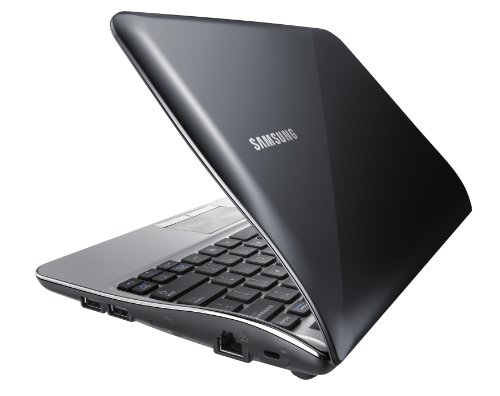 There are three USB ports fitted which is more than sufficient for a tiny computer which is designed for mobility. A netbook wouldn’t remain particularly mobile if it was connected to a large number of USB devices, but having the three ports lets you do what you need to at home.

Most computers today come loaded with a large amount of unwanted software. Netbooks aren’t quite so bad, because their normally more slimline specs need to run light. This netbook is one of the best, having next to nothing unwanted. It instead leaves you to choose what you want to install yourself.

One of the major features advertised is that the netbook has a three second wake from its ‘advanced’ sleep state, and surprisingly it proved to be true. Instead of waiting for the netbook to turn back on it seemed to almost instantly be turning the screen back on, yet remaining in sleep mode didn’t drain the battery.

As with all laptops how long the battery lasts depends on what you do with the laptop. Creating documents on it, or reading documents or eBooks offline can give up to eight or nine hours, but this requires for the wireless to be turned off. With wireless on an amazing six or more hours usage can be achieved for web browsing. Using media on the netbook shortens it a lot more.

Though the screen is small the resolution is high, giving a beautiful image. Samsung is well known for making high quality screens and have done so again here, with a bright and clear screen that has good, vivid colors. It makes watching videos online enjoyable, although the sound system isn’t great. Compared to many netbooks its an improvement, but there’s only so much that a tiny speaker can output.

The keyboard is almost full sized to make typing easy, but there are still a few mistakes likely at first. It is spill-resistant to protect the computer from liquid that could dribble between the keys. The touch pad is a good size to make using it easier, and gesture support is supposed to enhance the touch pad and make it easier and faster to use, but in practise was an annoyance. This is only a personal dislike because of a habit of resting digits on the touch pad when it isn’t being used, which can perform unwanted commands.

In practice, the NF310 is a nicely powerful laptop in a compact and power efficient package. It is light enough to put into a sleeve and carry in almost any bag, and in doing so will let you do all of your computing on the run.