Menu
×
Home › Blog › Apple iPhone vs Android: How To Choose The Best Smart Phone For You 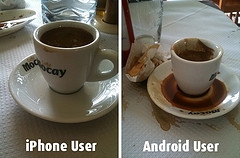 If you’re thinking of buying a smart phone one of the most difficult decisions you will have to make is choosing between an Android phone and an iPhone. Some people may already know what they want but others will have to compare an Android vs. iPhone and see which one proves a better deal for them.

When comparing Android vs. iPhone, people always look at the phones available on the Android platform. iPhone often loses out on this, as there are dozens of Android phones vs. a handful of iPhone versions. Android phones include the Motorola Droid X, LG Vortex, Samsung Galaxy S, HTC Hero, HTC MyTouch, and LG Optimus, to name a few.

With so many choices in Android phones, consumers will be able to find a smartphone with the features they want at a price they can afford. They are not limited to a single brand. Apple is known for the quality of their products and the iPhone is no exception. This is not to say, however, that the other brands are inferior. Android phones are coming out with high resolution displays, sensitive touchscreens, and other features that compare favorably with the iPhone.

When it comes to features of Android phones vs. iPhone, the Android has one advantage over the iPhone. There are now Android phones with 4G capabilities that are able to make full use of high speed 4G LTE cellular networks, such as the HTC Inspire 4G, HTC Thunderbolt, and Motorola Atrix. Apple, on the other hand, has yet to release a 4G iPhone.

When smart phones first started coming out, consumers would compare Android apps vs. iPhone apps. The Android platform started out with very few apps for their smart phones while the iPhone already had a wide selection at the Apple App Store. Mobile app developers, however, are coming out with new apps for the Android platform everyday and the Android Market now has hundreds of thousands of apps.

One thing the iPhone lacks is the capability to run Adobe Flash. This is a limitation that Apple seems to have no intention of rectifying. Android phones, on the other hand, can run Adobe Flash.

It’s not possible to make a comparison of Android vs. iPhone without looking into their operating system. The Android operating system is a modification of the Linux kernel. It is capable of multi-tasking. Because it is an open-source software, manufacturers are free to use it on their own devices and developers can create their own applications to increase the functionality of the devices.
The iPhone OS is derived from the Mac OS X and is exclusively used for the Apple iPhone. It is unable to multi-task.

It looks like the Android platform is poised to upset the applecart. It fact, sales of Android phones have gained an edge on iPhones. It’s true that Android apps still have a lot of catching up to do, but the way things are going that should not take too long.

Take A Look At Some Of The Top Selling Android Phones!