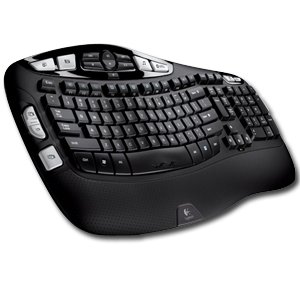 The K350 wireless keyboard from Logitech is an ergonomically designed keyboard. It is designed to both ease the strain on the hands and wrists when typing, as well as giving wireless convenience to your keyboard. And-it looks good too.

The curve of this keyboard isn’t as extreme as some are, and that means that it is far easier to get used to. In fact, it took only a matter of half an hour or so until typing became more comfortable, and within a day the slow down in typing that the switch caused was completely gone. Beyond that time, typing speed began to increase to a little faster than on the straight keyboard, as the movements are far more natural than having to twist one’s wrists slightly in order to reach the keys.

A padded wrist support is also included, and built into the keyboard. This is a nice feature when you are working at a desk, but is even more useful if you are working with the keyboard on your lap because it gives you something to rest your hands on.

When running wireless devices, there is a tendency to run out of USB ports to plug the receivers into. Logitech has thankfully introduced a unifying receiver that allows you to connect multiple devices all at the same time, through the same receiver and port. It will take up to six devices at once, including mice, full keyboards and number pads too. Of course this does mean that you are locked into only buying Logitech wireless devices if you want to use this feature, but since they work well together and they don’t tie up your USB ports, it is a sacrifice that is well worth making.

Battery life is impressive. The specs promise up to three years worth of battery life, this of course being based on an average usage. But it does mean that even a heavy user of the keyboard should get a reasonable battery life without having to worry about it dying on them, or them having to suddenly scramble to find new batteries.

There are a number of hot keys on the keyboard that are designed to control various media functions on your computer. These take a little getting used to, especially when you are used to using the mouse to select media functions on the screen instead of reaching for a short cut button. However, once you are used to the layout of the keyboard, they make it far faster and easier to reach the features that you are looking for. Some of the shortcut keys can even be set up to offer the functions that you choose, meaning that you can have the things that are most important to you as a shortcut.

The Logitech wireless K350 keyboard is a nice way to lose some of the wires that tend to clutter a computer desk, and to save yourself some pain in the hands and wrists at the same time. With a quality build feel to it, it is comfortable and easy to use.

What Customers Are Saying About The Logitech Wireless K350 Keyboard: