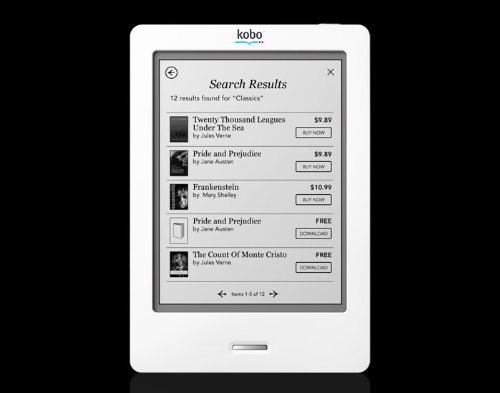 The Kobo Touch Edition isn’t quite as popular or as well known as eReaders like the Nook Touch or Kindle, but it is a viable option in the world of budget eBook readers. Keep reading to find out more about the pros and cons of choosing this particular device.

Pros Of The Kobo Touch Edition

Price: There are two major rivals to the Kobo Touch Edition: The Nook Touch and Kindle Touch. Both of these come in at $139 (though the Kindle is cheaper if you opt for the ad-supported version). The Kobo Touch is slightly cheaper, at $129, yet still comes with a sleek touchscreen and a variety of eReader functions.

Touchscreen: Touchscreen eBook readers are by now becoming the norm. Having a touchscreen on the Kobo Reader means it’s far faster to look up words in the dictionary (simply click on the word rather than scrolling through the page with the directional pad) and to access the menu items you want to use.

Memory Expansion: 2GB of internal memory is less than the Amazon Kindle Touch, but can still store around 1,000 books – more than enough for most users! The good news is that, unlike the Kindle, the Kobo Touch Edition does come with an SD memory card expansion slot to expand your memory up to 32GB (for 30,000 eBooks). It’s unlikely any of us will have enough eBooks to fill the expanded memory, but it’s always useful to have the expansion option available should you ever need it.

Web Access And Browser: The Kobo Touch Edition comes with Wi-Fi connectivity built in, as you’d expect when its main rivals are the Kindle and Nook. You can simply use this to shop for new books from the device, or you can take advantage of the included browser. Like most e-Ink reader web browsers, it’s not perfect but it’s a great feature to have on hand.

Design: Like any good eReader, the Kobo Touch Edition is designed to be compact and portable. It is lightweight, making it comfortable to hold as you read. The real thing that sets the Kobo apart from other eReaders, however, is the quilted back design. It comes in a number of different colors to suit your personality, and looks stylish and fun. The design also means that you’ll have a good grip on the device.

Battery: With the Wi-Fi turned off, the battery on the Kobo Touch Edition will last around one month, which is more than enough time for most users not to have to worry about charging all the time. Note that this is less than the two months boasted by the Kindle Touch/ Keyboard and the Nook Touch, but is still considered an excellent battery life.

Some Unique Features: Just like the Kindle Touch and Nook Touch, the Kobo Touch Edition comes with some of its own unique features. For example, the Reading Life function allows you to keep track of everything you’ve read, providing you with detailed stats and rewards when you meet certain requirements. Just with the Kindle and Nook, you can also share what you’re reading with Facebook and Twitter.

Apps For Other Devices: Like the Amazon Kindle and Barnes & Noble Nook, the Kobo has a variety of apps available to download for Android, iPhone/ iPad and your computer. This means that you’ll have your books available on you no matter which one of those devices you may be using.

Page Turns: Like the latest generations of Nook and Kindle, the manufacturers of the Kobo reader have gone to some effort to reduce the black screen flash that occurs when you turn the page on an e-Ink screen. This means that you won’t notice the screen going black every single page turn, which is nice (though most users don’t usually notice the page turns once they get used to using their eReader). Note that you can either swipe or tap the screen to turn the page, which is very intuitive and easy to do.

Cons Of The Kobo Touch Edition

Less Intuitive: When you compare the Kobo Touch Edition to its main Kindle and Nook rivals, you’ll find that the touch functions are less intuitive than the competition. The user interface isn’t quite as well designed and laid out, though you can still find your way around pretty easily.

Fewer Features: The Kobo Touch Edition has fewer features than the Kindle equivalent. Like the Nook, it doesn’t come with the ability to play MP3 files, nor does it have a text-to-speech function. That said, you can read PDF files and the device does support library lending formats.

Newspapers and Magazines: The Nook is famous for the way it can display magazines, and the Kindle also has an excellent selection of titles available in its store. The Kobo, on the other hand, has far fewer titles to choose from.

Is The Kobo Touch Edition Worth Buying?

In short, the Kobo Touch Edition is an excellent upgrade to its line of eReaders. There are a number of features on the device that help it stand up against rivals such as the Kindle Touch and Nook Touch, and the design certainly stands out. Although Kobo don’t offer as many books in their own store, the eReader is open enough to allow you to read content from other sources. All in all, the Kobo Touch Edition comes in at a good price and is a solid eReader.