The Dell Streak 7 is one of the smallest tablets on the market, with a 7-inch screen. To some this may be a drawback, but for many it makes it a very portable device. It also boosts a number of top specs, such as 4G connectivity, a powerful processor, lightweight design and a relatively low price tag. But how does it match up to the other high-end Android tablets on the market today? 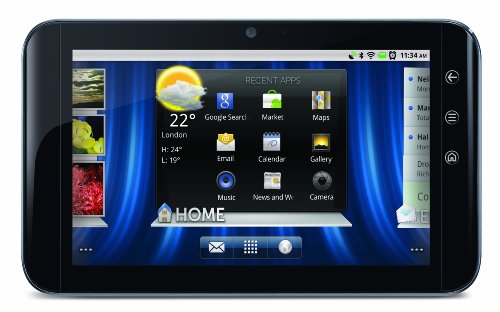 Key Specs For The Dell Streak 7

What’s Great About The Dell Streak 7…

SD Card Slot: Although the Dell Streak 7 only comes with one base option for inbuilt memory (16GB) you can expand this by as much as an additional 32GB thanks to the included SD card slot. This slot supports SD, MMC and SDHC memory card formats, and is useful for those who wish to transfer photographs (as SD cards are more common in cameras than micro-SD that many other rival tablets use).

Design: The 7 inch screen is noticeably smaller than most other tablets out there today, and the resolution is proportionately lower too. However, this is a feature that’s been designed to make this tablet as portable as possible, and the quality of the screen really doesn’t disappoint. The colors look bright and bold, though the viewing angle isn’t as good as some of the other tablets available. It makes use of Gorilla Glass to minimize scratches that inevitably happen with any tablet screen, and it feels like a solid and well-built design (if a little plasticky).

Connectivity: This is one of the most impressive features of the Dell Streak 7 – it has the ability to connect to 4G networks (as well as the standard 3G and Wi-Fi hotpots). So far its only rival in this area is the Motorola Xoom, so this will turn a lot of potential buyers onto the Streak.

4G broadband is a very new technology, and at present is only available to around a third of all Americans. However, the network is growing all the time, and using it means that you’ll be able to download whole movies across a mobile network! This does come at a price in the form of a more costly tablet and a monthly data plan, but it’ll be well worth it for those who wish to stay connected wherever they are. You can’t beat 4G technology!

Camera: At 5 megapixels, the rear camera is among the top for tablet computers. It comes with extra features to help improve photo and video quality, such as LED flash, auto focus and multi-shot mode.  It can also capture HD quality video. The front-facing camera is decent at 1.3 megapixels (enough for the video chats it was intended for).

USB Port: A USB port is also a very welcome addition to any tablet, meaning you can connect it up to mass storage devices for fast file transfers and backups, as well as external keyboards that’ll make your device even easier to use.

Price: Although it does have a smaller screen and less storage space than its competitors, the Dell Streak 7 is far more affordable starting at $300. The 4G option is also good value at around $450 – far cheaper than any 3G versions of the iPad, despite the fact that they don’t even have the option for 4G. This is a good “in-between” option for those on a tighter budget who don’t want to compromise on processing power.

What’s Not So Great About The Dell Streak 7…

Operating System: The Streak runs on the Google Android 2.2 operating system. This isn’t as modern as the latest versions of Android, and doesn’t work as smoothly as alternatives such as iOS. However, you’ll still get access to the Android Market app store, with a good selection of apps (some may not work with the older 2.2 OS).

Battery Life: There seems to be a good reason why Dell don’t make it easy to find out how long the battery is supposed to last, and that’s because it doesn’t last long at all. Tests have shown it’ll last around 3.5 to 4 hours on average, which is less than half of what you can expect from iPad, Galaxy Tab or Xoom (all boasting a long 10 hours). This really isn’t great if you’re out for long periods of time, as you’ll frequently need to charge it up.

Ease Of Use: Although the touch screen works well, the virtual keyboard does somewhat let the Streak down. It is cramped, not surprisingly because the 7-inch screen is a lot smaller than what we’re used to seeing on other tablet computers. You’ll want to stay in landscape mode for the bulk of your typing.

The Dell Streak 7 really is a decent tablet with a very good price tag. The price tag alone will be enough to steal a number of buyers away from the likes of Apple and Samsung, onto this smaller yet still well-built tablet. Unfortunately, however, the battery life will turn an equal number of potential buyers away from the tablet.

Overall, this tablet has a good screen, good features and a powerful processor. But the lack of the latest Android version, a smaller screen and the battery life are all important issues for you to consider before making your final decision.