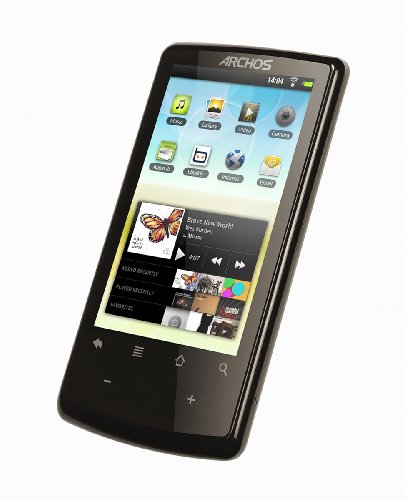 When shopping for a new MP3 player, Amazon suggested instead a number of small Android tablets that worked as media players. This was an attractive idea, mimicking as it does the iPod touch, and giving not only an MP3 player but also other functionality for a fraction of the cost of the iPod touch. However it was primarily bought as an MP3 player.

Like all Android devices this one was very easy to use. It has a relatively intuitive interface that makes it easy to use, however the fact that the touch screen is resistive instead of capacitive can be an annoyance at times when accessing the interface. As resistive touch screens go it is highly responsive.

The player is small-about the same size as the average smart phone today and in fact it provides the majority of the same functionality. The only thing it won’t do is call out. When on a WiFi network it can access the internet, download or send email, and view videos online. You can also install new applications for it, but not from the official Android app store as this is not supported. It does however give you the chance to increase or to change functionality. With Android 2.1 installed it has plenty of functionality, but is several steps behind the latest releases. Still, good enough for an MP3 player.

There is a web browser that comes built in, and that works well. Youtube videos can be watched on the Youtube app, and the screen displays them at a sufficiently high resolution as to make them look good. A camera is included on the tablet that will take video, but the quality is middling-better than having nothing available but not good enough to replace a standalone video camera no matter how cheap.

There are a few notable drawbacks to this device, the biggest being the lack of micro SD slot as most Android devices now have. It means that the only storage available is the 8GB that is already installed. However this is no different to the iPod range that are also limited to their onboard memory.     %%BUTTON%%

There are no speakers built into this either, and this was a disappointment at first. However the speakers on these small devices are normally so poor in sound reproduction quality that they simply aren’t worth using anyway, so the need to connect external speakers is a minor issue. A separate purchase is also needed for a good pair of earphones, as the supplied ones give a very poor sound. The tablet is capable of blue-tooth connections, giving a good way to connect speakers wirelessly.

Considering the price of this device, and the fact that it was bought as an MP3 player, it has turned out to be quite an incredible device. With a couple of separately bought accessories and some time spent fine tuning the apps it does everything that could be asked of it, and far more beyond, instead being more of a complete entertainment device, and certainly good value for the money paid.